As a software developer, all of us come across SQL queries and databases at least a few times in the development process. All of us have written multiple queries. Starting with the most simple select queries to very complex nested query statements and procedures. Wouldn’t it be exciting to know about how the SQL server goes about executing these queries? Also you might have noticed that sometimes our SQL query takes longer that expected to return the result? Why query is slow? The reason for this delay might be found out in the SQL Query Execution plans.

The SQL server surely must use some strategy in order to execute the queries and fetch data efficiently from the database. This task of interpreting the query and analyzing it is done by a component called Query Optimizer. This query optimizer takes the query, database schema (tables) and indexes as inputs and generates the Execution plan for the query.

What are SQL Query Execution plans?

A simple definition of an execution plan can be given as: The query optimizer’s way to determine, efficient execution of the SQL statement presented before it, is known as an SQL query execution plan.

Almost all the doubts regarding the execution of the query, optimal usage of indexes, number of tables scans during a query execution can be solved by taking a look at the execution plan for the query. This blog is an attempt to understand the execution plans and know how they can be useful while writing a good query.

Before we go into the details of an execution plan, let’s have a quick peek at how the execution plan looks like. There can off course be slight differences in how different SQL clients present them. But this is just to have an idea of what we intend to study:

The SQL statement goes through the following stages during execution:

Let us take a look at these phases in short,

Now, what points are considered while checking the syntax of the query? Points such as, resolving names of different tables, columns, objects within the query string, identifying datatypes for the columns and location of different functions like aggregate functions in the query.

Important point to note here is that this parsing is done only for DML queries. DML queries are Data Manipulation Logic queries. These queries are which perform addition, deletion, updation and selection operations on the data in the database. Thus there can be multiple ways to perform these operations effectively. In contrast to this, the DDL queries. These are the Data Definition Logic Queries. These queries concern with the creation deletion and updation of database or table structures. There is only one way to correctly create/update/delete tables or database structures and hence parsing of these queries is not necessary.

As we are speaking of execution plans, this section is quite important for us. The generation and evaluation of an execution plan is done by the optimizer. The optimizer decides how to execute the given SQL statement efficiently. Depending upon application of joins, usage of indexes in the query and the cost to perform these operations (in terms of CPU processing and I/O cycles)the optimizer selects an efficient execution plan. Hence, it is also known as a cost-based plan.

The optimizer generates many execution plans and evaluates them against each other to select the most efficient one. It decides the efficiency of the plan depending upon minimum resource utilization(CPU and I/O) and how quickly it returns the result for the query.

The optimizer uses a CPU intensive program to evaluate these execution plans. Therefore if the SQL statement presented to the optimizer is simple then the optimizer generates a single trivial-plan. This execution plan might not be very quick to return results, but as compared to the resource usage for the evaluation of different plans for the query, this plan is then beneficial.

How does it optimizes?

Now, one might think, optimizer is just a program, how is it able to decide efficiency of the execution plan? For this purpose, there is a lot of data about the different indexes, columns and their frequency of occurrence in a SQL statement present in the SQL server. These are known as statistics. Every time a query is executed the data about the Where clause, the Joins, the Indexes is added to these statistics.

Each logical operation in the query tree is assigned an estimated amount of time. The sum total of the execution time of all the operations in a query then becomes the estimated cost of execution for the query.

An important thing to note here is, all the execution time calculated here is an estimate of the time that might be needed to perform an operation. Given an infinite amount of time and complete, up-to-date statistics, the optimizer would find the perfect plan for executing the query. 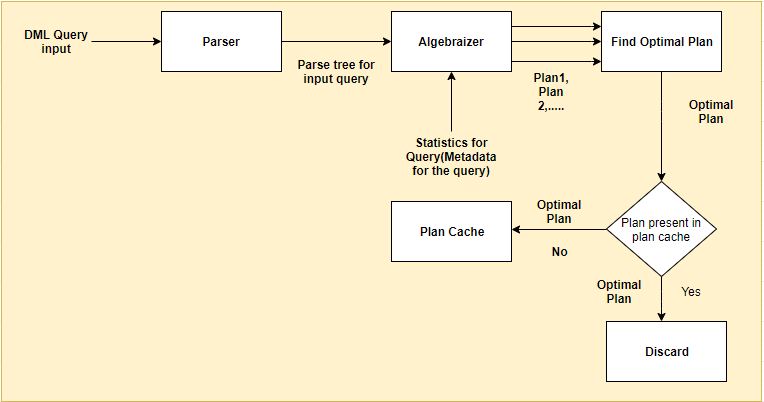 Once the execution plan is generated, the query is actually executed, according to the plan. We shall learn about the details of execution later as it doesn’t concern our execution plans, except to note that the carefully generated execution plan may change during the actual execution process.

Why would this happen?

The results of the query are returned depending upon the successful execution of the actual execution plan.

So far in the discussion we came across two terms: Estimated execution plan and Actual execution plan. Let us dig a bit deeper into why these two plans are required. Firstly, these can be defined as below:

Estimated query execution plans: Estimated plans provide an estimation of the work that SQL server is expected to perform to get the result.

As discussed in the Optimizer section above, the SQL server maintains statistics(metadata) for the SQL queries being executed. Also, these statistics are subject to change on every query execution. For example, when new data is added, or existing data is deleted or updated the values that represent the indexes in the metadata might change. Over a longer period of time the statistics may no longer represent the actual data appropriately.

Not having run time data:

The execution plans are made before the actual queries are executed. Thus, there are some points where we create temporary tables or views in our query. But these are only created during the execution of the query. Hence, the estimated plans do not take them into account. Consequently generating a faulty estimation plans.

In such cases the actual execution plans are more helpful instead.

Reuse of an execution plan

As said in the discussion above, the optimizer stores the plan into the plan-cache after generation. But if there is already an actual plan present in the cache identical to the current one, then the current plan is not stored. So said, each plan is stored once in the memory of the server.

If parallelism is supported for a query, then there is a possibility to have more than one execution plans for that query. But these plans contain different set of operations that can be executed parallelly.

The estimated plan is removed from the memory when:

The memory management of the server scans all the caches including the plan-cache at regular intervals to perform the cleanup.

Any cookies that may not be particularly necessary for the website to function and is used specifically to collect user personal data via analytics, ads, other embedded contents are termed as non-necessary cookies. It is mandatory to procure user consent prior to running these cookies on your website.